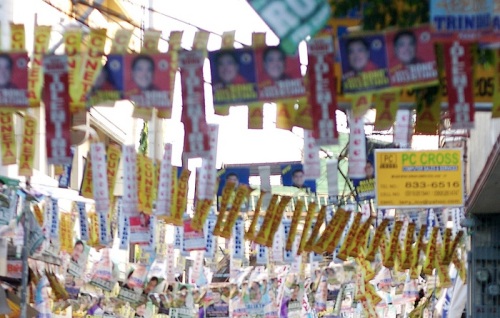 A couple of weeks ago I had this brilliant idea of regularly watching The World Tonight, ANC’s daily English-language news program, to note down evidence of Filipino usage during the broadcast. At least, I thought it was a great idea at the time, and indeed a number of very interesting words and phrases crop up during every newscast. Yet what is good for my research is not always good for my sanity, as my brainwave came just when Philippine news was beginning to be dominated by the 2013 election campaign coverage. So every day for the past two weeks I have been witness to all the mudslinging, masa-pandering and gratuitous singing and dancing that prelude our every trip to the polls. I industriously wrote down words and watched with gritted teeth as disgraced politicians clawed their way back to government, as every ina, kapatid, anak, asawa, lolo, pinsan, atbp. staked their familial claim on our provinces and regions, as more deserving candidates got shoved to the background by those with more money and star power. The things I do for lexicography!

And yet there is no denying that election season has always been fertile ground for language study. Just as last year’s US presidential elections brought to the public consciousness such terms as air war, electoral college and Super Tuesday, this year’s Philippine midterm elections brought to my attention some very notable words that perfectly encapsulate the crazy, colorful circus that is our democratic process.

No list of election-related Filipinisms will be complete without them, so I might as well start with our very clever –able derivations. This year’s campaign period has offered us an endless parade of aspirants for several positions in the executive and legislative branches of government, or, as we know them, senatoriables, gubernatoriables and mayorables. And, in an even higher-stakes race happening in three years’ time, these candidates will be joined by presidentiables and vice-presidentiables. A full stable of –ables that, according to Filomeno V. Aguilar, Jr., began at the end of the Marcos era:

“In recent years, contenders for the presidency have become known as ‘presidentiables’, probably indicating the time when, just after the downfall of Marcos, it was not clear who could possibly be a replacement for such a strongman. Since no one seemed to match the talent, prowess, and everything about Marcos, the search for who could possibly become president led to the invention of the word ‘presidentiable’.”

Betting on democracy: Electoral ritual in the Philippine presidential campaign, in Chua Huat, B., ed. Elections and popular culture in Asia

My friend Benedict Bernabe works for B-Change Foundation and is an expert in development studies, and as such no stranger to political jargon. He’s also been one of my favorite friends for random linguistic discussions since our days as language majors at UP. So naturally I found myself talking about election words with him, and true to form, he came up with a very interesting observation. He saw these –able words as “symbolic of our desire to convey the most meaning in the least number of words. Much like pointing with our lips instead of giving directions verbally, Pinoys would rather say ‘gubernatoriables’ than ‘candidates for the position of governor’.” He also pointed out how these words are adjective in form but are in fact nouns in usage.

I know many people cringe at these formations, but I find them to be delightful examples of how people experiment with words, pulling them apart and putting them back together, playing with meaning and function and form to express different concepts. It is a universal tendency. In fact, Filipinos are not the only ones to use the word presidentiable, as both noun and adjective. The French do, too:

So how can you find presidentiables and their ilk all gathered together in one place? By going to a miting de avance, of course. This is the Philippine English term for a big political rally, traditionally the last one before an election, the candidates’ final opportunity to convince voters to write their names on the ballot. But the following recent examples of the term’s usage in recent publications make them seem to be more public spectacle than political gathering:

“The miting de avance or final rally is an old ritual adapted to recent times. It is a meeting a party and its candidates hold just before election day, or on the evening of the last day of the official campaign period. The speeches are conventionalized, with the usual attacks on the opposing candidate, often delivered in a manner that elicits laughter from the mass of supporters. Political rallies, in this sense, constitute entertainment, but the crowd of supporters is also taken as an index of a candidate’s popularity and chances of electoral victory.”

“A Miting de Avance with POLITICIANS promising heaven to get votes: “If I win, I promise you, no family will go hungry during my term! No one will be a squatter in his own native land! Every Filipino will have a job! The Philippines will be heaven on earth.”

What I think is most striking about miting de avance is that it is a phrase that is Hispanic in form, ending with two words in Spanish, but beginning with an English word spelled the Tagalog way. The Spanish phrase literally translates to advanced meeting in English. The fact that meeting was borrowed into Spanish from English to mean a political meeting (spelled mitin), may be a possible reason for this curious hybridity.

And then there is the word trapo. I love this word. I am of the opinion that whoever thought of it is an unqualified genius, a wordsmith equal to Shakespeare (apparently, there is an ongoing debate over who actually invented the term: the good people of Sorsogon or columnist Tony Abaya—read all about it here). Consider the succinct beauty of the coinage: trapo fuses together the component words of the English phrase traditional politician, but the resulting blend is also the Tagalog word for a dirty old rag, which itself comes from a Spanish word still in current use:

Trapo, according to Charlie Pye-Smith, “is used to define a system which relies on patronage, feudalism, and the old boy network.” Smita Lahiri describes the word as “a colloquialism that handily condenses all the underhandedness, ruthlessness, and amorality associated with the realm of electoral politics in this country.” I have to agree with Ms. Lahiri’s assessment. Trapo is not only a convenient contraction, it is also a vivid, highly effective metaphor that likens a corrupt politician to a filthy, disposable scrap of cloth, good for nothing more than wiping off dirt. And just like miting de avance, it’s a word that combines Tagalog, English and Spanish influences. It is a word that distills centuries of Philippine political, cultural and linguistic history into five letters.

And finally, what trait seems to be lacking in most of our politicians nowadays? Delicadeza. This is another Spanish borrowing, and it can be directly translated to English as tact. However, in Philippine English, the word is infused with notions of decency and honor that goes way beyond the word’s original meaning.The Anvil-Macquarie Dictionary of Philippine English for High School sums it up best in its entry for delicadeza, which is also a very good example of how a dictionary can be an unlikely source of pithy social observations:

delicadeza, n.
A sense of decency and knowing how to behave with dignity.
NOTE This is considered to be an important value that present-day Filipinos are thought to have lost. It is used mainly with reference to corrupt politicians who, after being found out, still don’t resign from their position.

But with elections only mere weeks away, who has time for that?

I am the Mellon Postdoctoral Fellow in English Language Lexicography of the University of Oxford . I am based in the Faculty of English Language and Literature , but I conduct part of my current research on Philippine English and the Oxford English Dictionary at Oxford University Press . I am also an Associate Member of Hertford College .
Please see my website for details of my CV and research.